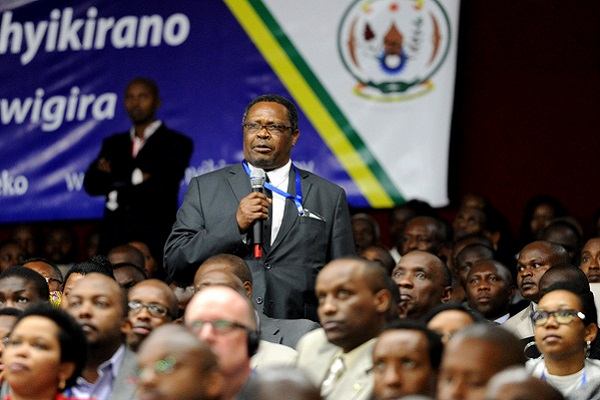 Now in its twelfth year, Rwanda’s national dialogue council is one of the highlights of the civic calendar. The event brings together leaders from a broad cross-section of society including government, civil society, the private sector and international bodies. The idea is simple – get everyone with major decision making power in a room together and give the public the chance to ask them whatever they want. Questions range from highly personal ones about social security benefits to national fiscal policy to the artificial insemination of pigs. It seems nothing is off limits.

The two day question and answer session is chaired by Rwanda’s president, Paul Kagame, who had this to say in his opening speech at last year’s event:

“This dialogue is not as peaceful as one might think; having this dialogue is like launching a war and calling people to join in. It’s a war to fight against poverty, diseases, hunger; a war for development. It’s not a simple thing.”

Hardly the language you would expect to hear about an event with the stated purpose of discussing ‘national unity’. But this forthright approach is what makes Umushyikirano (the local name meaning ‘to negotiate’) such a good example of democracy in action. At last year’s event I saw ministers being grilled by ordinary Rwandans who had their calls piped over the parliament speakers. I saw the President calling on members of the private sector to explain why their businesses weren’t supporting local farmers and the head of the country’s electricity provider being told to remove the monthly tariff on home meters (which has since been done).

With this year’s dialogue beginning today I thought it timely to write about five lessons the world can learn from Umushyikirano:

Rwanda’s dialogue council gives ordinary citizens the chance to ask their leaders questions and hold them accountable. At last year’s event a man called in and asked the President why the road he promised hadn’t yet been built. In another case, a farmer sent a text asking why the local milk processing plant wouldn’t purchase his product for a decent price. The head of the country’s largest dairy company and the minister for agriculture were forced to stand up and explain.

It might not be comfortable for those on the receiving end of the questions, but it’s a genuine way for Rwandans to keep their leaders in check and hold them to their word.

In 2012 over 11,000 questions and comments were received at the event. That amounts to about 1000 questions an hour. Giving citizens the chance to contribute via phone, SMS and social media like Twitter means that a much broader cross section of the community can be involved.

While not all questions are answered on the day, records of what was asked are kept and reviewed after the event.

When an entire country’s leadership are in the same room together, everyone is responsible for solving the problem. Leaders aren’t able to shift blame or put off dealing with the problem. They must confront it head on and fix it then and there or say exactly how they’re going to do so and when.

One of the first items on the agenda is a report from the Prime Minister about the extent to which the previous year’s decisions were implemented. The PM must detail the completion rate of each resolution and if some haven’t been finished, explain why. This creates the perfect incentive for getting things done because there’s no fun in telling your boss you haven’t done your homework, especially in front of the whole country.

Rwanda’s national dialogue is broadcast on radio (Rwandan’s media of choice), TV, online streaming and through social networking sites like Twitter and Facebook. This gives Rwandans from all walks of life the chance to be part of the event. From Cyangugu to Chang Mai, Rwandans at home and abroad can follow the proceedings of Umushyikirano live.

By demonstrating that the country values fierce conversations, Rwanda is creating the space for debate, new ideas and progress based on what citizens want. And that’s something all nations can aspire to.