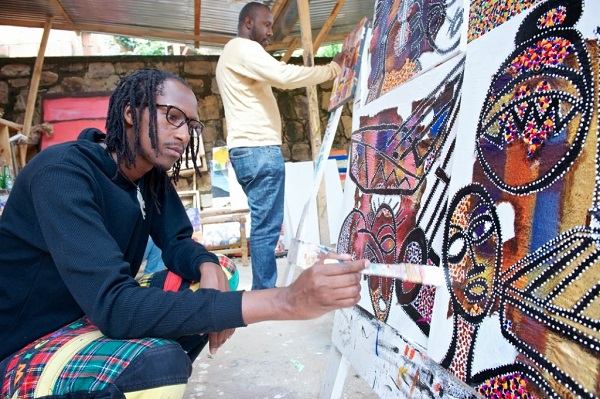 Arriving at Inema Arts Centre, I encountered twenty young Rwandans learning the moves to Michael Jackson’s ‘Thriller’. Clearly this was no ordinary art gallery. The boys and girls were rehearsing an upcoming concert and had mastered the first two verses and chorus. In the soft light of Kigali’s setting sun, it was an unexpected sight.

Inema Arts Centre is the passion and purpose of two brothers, leading contemporary artists Emmanuel Nkuranga and Innocent Nkurunziza. Founded in 2012, Inema is a place of contagious positivity. While the focus is on providing a space for resident artists to share and develop their skills, Inema, meaning gift in Kinyarwanda, is much more. Emmanuel describes it as a place where everyone can share their creativity and passion. And today, according to the self-trained artist, a virtuous cycle of giving, loving and sharing has taken hold. From the moment you step inside the gallery space, there is no denying there’s something special at work.

Emmanuel and his brother Innocent grew up in Uganda before their parents moved the family back to Rwanda in 1997. At just 11 years of age, Innocent was already a passionate artist and used crayons and brushes to recreate the world around him, often burning the crayons to make paint. Though his school never offered art classes, Innocent’s mother saw his potential and today he credits her with giving him the courage to pursue his passion. Four years later Innocent’s talent was given the chance to truly shine when London based artist George Hicks came to Rwanda to share his skills with budding artists. After only one month, 79 of the 80 students in the workshop had quit. Only Innocent remained. It wasn’t hard for Hicks to predict that the 15 year old would go on to achieve international acclaim.

For Emmanuel, passion for paint came a little later. As a keen sportsman, he was more likely to have a basketball than a paintbrush in his hands. But after the sudden death of their mother, Emmanuel took to painting as a kind of therapy and his talent didn’t go unnoticed for long. Of finding the power of art he says, “I didn’t know that art could heal me, that it could be an aspiration and that I could share my experiences, talent and resources to help others realise the amazing hidden talents they might have”. And that’s exactly what Emmanuel is doing today.

Both brothers draw on the memory of their mother as inspiration for their art and their commitment to the centre. For Innocent, a promise made to paint her portrait spurred him to take on painting full time. For Emmanuel, the care and love his mother showed to children in their community, and at the school she founded with her husband, inspired him to set up a number of programs to help young people realise their potential. According to Emmanuel, she made everyone feel special and unique and he wants to do the same. Today Emmanuel’s dream of educating young people, showing them a brighter future and training them to be professional artists has become a reality.

One of just many at centre, Art with a Mission is a program run by Emmanuel and his team to train young Rwandans with limited resources on how to tap into their artistic skills. Now in its third year, artworks produced by the students are on display and sold at the Inema gallery to cover school fees and living costs. Plans are underway to expand the artistic medium to photography and theatre. The centre also hosts a workshop for local women who craft exquisite handicrafts and jewellery. Known as Nziza Artworks and founded by Innocent in 2010, the 16 women involved are creating a bright future for themselves and their families through first class art. Inema is also helping to keep Rwandan culture alive through its dance and drum troupe. Young people are trained to become ‘Intore’, learning the rich history of the famous performance style. The troupe travels the country with income generated helping to pay the performers’ school fees.

Both brothers credit Rwanda’s culture and stunning landscape for inspiring their work. For Innocent, “the dynamic rhythm of nature, people, colours and texture are the basis from which my art is derived” while the country’s Akagera National Park is “where you see the real colour of the world”. For Emmanuel, “anything is art. It’s just how you interpret it – nature, people, movement – everything. Rwanda and its great weather put me to work”.

The two brothers and ten resident artists are winning over art lovers and critics at home and abroad. Exhibitions across the United States including in New York, Washington and San Francisco as well as in London, Germany, Sweden and Belgium have wowed crowds, and with good reason. The artwork produced at Inema is unique, intriguing and beautiful, capturing the spirit of Rwanda in a way that no words on a page or image on Facebook ever could. The centre hosts local and international exhibitions, the latest by US artist Renee Balfour, and a showcase of Inema artists is currently touring Kigali hotspots.

What strikes you as you soak in the artwork, from stunning portraits and painted motorbikes to metal sculptures and carved crocodiles, is that they’re clearly more than just colours on a canvas. The art represents a way of being and of being with others. It’s a powerful expression of how the world could be – one joined together in creativity, love and beauty.

Emmanuel and Innocent told me that their dream was simple – to find artists and work together. But what the brothers have built is something far greater. Inema is a gift to Rwanda and to art lovers the world over. So next time you’re in Kigali, head down to Inema Arts Centre in Kacyiru and see for yourself what’s got the art world talking, and maybe even a performance of Thriller.

To learn more and be part of Kigali’s positive energy art scene, visit www.inemaartcentre.com or follow the centre on Twitter at @InemaArts.